How to Recognize a Sociopath 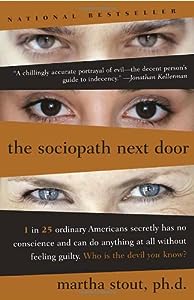 There is a subgroup of human beings that walk unnamed among us. They are called sociopaths or psychopaths. These individuals cause a great deal of pain to other human beings in the world through their cruelty, manipulation, deception and power plays. The Diagnostic and Statistical Manual V(newest version of the book most commonly used by mental health providers to diagnose mental health concerns),

The most shocking characteristic that we encounter in the mind of the sociopath is the lack of a conscience. This means that the guilty feelings most of us get when we do something wrong does not trouble the sociopath. Nor can the sociopath feel our pain. Most of us have had that strong feeling of connection to another’s pain. We empathize. We cry at sad movies; we cried when the Twin Towers came down. Sociopaths do not feel empathy. They cannot share another person’s suffering or loss. In fact, they seem to underreact to all painful stimuli. This is a consistent finding in research.

However, they can imitate empathy once they learn how to blend in. What do I mean by “blend in?” Experts in the field seem to agree that sociopaths try to fit in by taking on more socially appropriate masks.  Hence, these cold, unfeeling individuals learn to fake feelings and to say socially appropriate things to blend in. Meanwhile, they manipulate others, destroy lives and wreak havoc. Criminal behavior is nothing to a sociopath who craves money and power. And although a number of sociopaths are in prison (according to Hare et. al, 1993, only about two in 10 inmates are sociopaths), there are just as many who never get caught at criminal activities. Still others live unethical and immoral lives, but not illegal lives.

Famous sociopaths, such as Michael Milkin and Bernie Madoff, schemed and stole millions of dollars. Though many sociopathic people are quite intelligent, they often overestimate their own intelligence.  They often wind up in positions of authority, unfortunately, because they crave power over others. Hitler and Stalin were twisted, cruel men whose leadership resulted in the deaths of millions.

Are all serial killers sociopathic? Yes, usually. However, not every person who lacks a conscience wants to kill or maim other people. Neither are all people with this disorder intelligent; the goals of the less bright are usually more simple - such as manipulating spouses into earning all the money so that they never have to work, convincing other people to care for them and support them financially, conning their family members out of thousands of dollars.

Sociopathy is not an all or none concept. One individual can possess a few of the traits, while another can possess each and every one of them. The more features a person reliably possesses, the greater the likelihood that someone does have this personality disorder. You can be a lazy person who dislikes responsibility of any sort, but not wish to harm others or exploit others. We would not say that you were a sociopath, in that case. Being unemployed or having a substance abuse issue does not make you a sociopath either! The lack of empathy and desire to exploit others are hallmarks of the sociopath. I have often observed that some couples in the midst of divorce exhibit a distinct lack of conscience about hurting their estranged spouse. This does not represent sociopathy. It does represent an irrational anger and hatred for one’s spouse. We are all capable of cruelty, lying and extreme selfishness, given the right circumstances. However, the sociopath makes a lifestyle of these traits.

So, how do sociopaths get around and become so successful? Martha Stout, PhD., who wrote an interesting book called The Sociopath Next Door, says that it is partly society’s fault. We ignore the fact that a man or woman is doing insensitive, immoral things and make a bunch of excuses for their actions. She points out the fact that sociopaths are experts at appealing to our sympathies and convincing us that they really mean well. The sociopath blames others for his/her situation – “I got fired for stealing from the cash register when everyone else does it too.” This is not to say that every person to externalize blame is a sociopath. Sociopaths simply use externalization of blame as a way of maintaining their charade of innocence and victimhood.

There is currently no cure for sociopathy. The causes are still being studied. Researchers have found that genetics explains only half the reason why sociopaths are created. Environment and upbringing seem to explain the other half. In their Scientific American Mind article, Drs. Kiehl and Buckholtz summarize the mixed findings this way: “Some psychopaths are scarred by rough childhoods, but others are the ‘black sheep’ of stable families.” Kiehl and Buckholtz have studied the brains of sociopaths and found that their “paralimbic system” is underdeveloped compared to the brains of nonsociopaths. They argue that society needs to better fund research into treating sociopathy, as incarceration, damages and trials cost the taxpayers between $250 to $400 billion a year.

The advice of experts on how to deal with sociopathic personalities is pretty unanimous:  stay away from them and protect your assets as best you can! If you have the misfortune to have a sociopathic boss, you will probably want to make arrangements to work under a different person. Domestically-abused women often realize that their partner was a man with no conscience, who took pleasure in beating them and cutting them down. If you are dating or engaged to someone you suspect is a sociopath, there is no formal cure for this disorder. If you think you will change this type of person, you are probably kidding yourself.  Parents, if you have a sociopathic adult child, you need to protect your monetary assets and develop healthy, strong boundaries.  People who are dealing with the shocking actions of a sociopath can benefit from brief psychotherapy to address their grief, shame, embarrassment and disillusionment with humanity as a whole.

We can learn to recognize such people. Donna Andersen, in her book Red Flags of Love Fraud: 10 Signs You’re Dating a Sociopath, gives some helpful tips about recognizing sociopathy in love relationships. There is no replacement for reading her book, but a quick rundown may illuminate the signs better:

“Inside the Mind of a Psychopath” by Kent Kiehl and Joshua Buckholtz in Scientific American Mind Magazine, September 2010.

The Handbook of Psychopathy, edited by John Patrick,  2006. Guilford Press.

More from the blog...

Hand Washing: How and Why

FAQ: Where can I get a flu shot?